A Host with the Most: How to Select an Event Emcee and Host Virtual Events

2020 demanded flexibility and adaptability from many and PRSA NCC was no exception. As we planned our annual National Capital Excellence in Communication Awards (ECAs), we navigated adapting our Chapter’s biggest and most well-attended event of the year into a fully virtual celebration for the first time in its 52-year history. Here are some lessons and best practices we learned along the way for hosting an engaging online program. 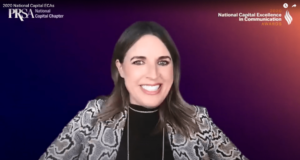 Here are the seven areas to give special consideration when planning your next virtual event.

Your virtual event emcee provides authenticity, warmth, energy and personality that people relate to — that human connection that is so important in today’s distanced and physically-isolated environment.

As communicators, it was important for us to have an engaging, energetic, experienced and inviting host to tie everything together for attendees. A virtual emcee serves as the glue that welcomes attendees, lets them know what to expect, guides them on their journey, and provides a warm, human connection they can rely on and relate to.

Local media celebrity Sarah Fraser served as our emcee. Fraser has been a staple on airwaves across the D.C. metro area and beyond for many years. She previously hosted “The Sarah, Ty and Mel Show” on 107.3,“The Kane Show” and “The Sarah Show” on HOT 99.5 (WIHT-FM). Fraser currently appears weekly on FOX 5’s “Good Day DC” and hosts her own podcast, “The Sarah Fraser Show.” In addition to her regular work, Fraser uses her robust social media following to discuss social issues, particularly those concerning women’s empowerment and minority-owned businesses.

Another reason we chose Fraser as our host was her on-camera experience. A virtual event emcee with on-camera hosting experience adds another layer of security in ensuring your event host will knock it out of the park with approachability, an energetic personality and the ability to improvise during the event, if necessary.

No matter the format, emcees also must truly listen and react to speakers and audiences while conveying key messages in an engaging and soulful way to inspire action. Fraser’s ability to pivot when necessary and remain laser-focused in the moment, summarize messaging in an impactful way, and improvise with humor, ease and grace made her the ultimate choice for our event.

When broadcasting from a studio or auditorium isn’t possible, a virtual emcee fully equipped to broadcast from home is a must. Ideally, a virtual emcee should have a high-resolution HD or 4K camera, studio color-balanced lights, studio stereo microphone, a teleprompter (which can be run from the emcee’s computer) and a second large monitor to track chat and production direction. These elements help present a polished and professional performance. Other optional equipment may include a green screen and natural background.

Content including keynotes, video teasers and even emcee segments can be pre-recorded. It might sound counterintuitive, but think about it — your end-user is navigating through the event you’ve created on your chosen platform. As long as their experience is seamless and all the content is there in the way you want it delivered, does it matter that the content was pre-recorded? It depends.

There are pros and cons to pre-recorded content. One positive is there’s more control over the tech aspect with speakers’ internet connections and the option to record multiple takes and select the best ones. However, pre-recording presents the inability to do live Q&A with the emcee or interactivity with polls and real-time engagement activities. You can still offer a survey to get audience feedback on the overall event.

Given our event is typically four hours, including a cocktail hour followed by awards and speeches, we narrowed our content to a 60-minute virtual event. As such, we had our Hall of Fame inductees record their speeches, which were used as part of an overall Hall of Fame video that was played at the event showing background footage of their days. The full-length versions of their speeches were posted on PRSA NCC’s YouTube for attendees to watch later. Because there wasn’t time to read the summary for each award, we created a video that displayed the finalists’ categories, background footage and logos.

It’s important to communicate with your target audience prior to the virtual event. Incorporating pre-recorded video links of your virtual event emcee welcoming them and giving a preview of what they can expect into promotional emails is a great way to reach audiences. Video teasers on social media, event websites and email blasts will excite and motivate attendees to act and prepare them to get the most out of their time at your virtual event.

We had a graphic designer create badges for the finalists and winners to share on social with accompanying messages as well as a logo for the event and consistent branding to be shared across our channels. We also asked our Hall of Fame inductees to do takeovers of our social channels to showcase their leadership, typical “day in the life, and entice people to attend the event. Fraser also shared graphics and messaging on her channels.

Finally, like the majority of organizations hosting events, we had our graphic designer create a Zoom background for all our presenters to use.

It’s essential that customization of graphics, colors, themes and branding are included in your virtual platform. You want your organization’s look and feel to come through loud and clear as users navigate the platform.

Because the event was virtual, it provided an opportunity for us to have unique and different sponsorship levels. Our sponsorship opportunities this year included: green room sponsor (where presenters were before they were live on stage), musical entertainment sponsor, video production sponsor, graphic design sponsor, Hall of Fame sponsor and event/emcee sponsor.

Entertainment also provides a unique appeal. We hired a local D.C.-area musician, Brian Johnson to host a virtual concert following the event. Johnson is a native Northern Virginia singer, songwriter, bartender and screenplay writer with a style akin to City and Colour, John Mayer, Jason Mraz or Zac Brown. We invited attendees to stay after the formal program ended to enjoy Brian’s performance.

Human connection is imperative during a virtual event as attendees long for people connection now more than ever in this isolated, distanced environment. Q&A sessions, chat messaging, instant notifications, polling, surveys, feedback, word clouds and tech  can pay off big time in your attendees’ experience and the overall success of your virtual event.

In this case, an excellent and vibrant singer and entertainer was a great way to close out our event.

Because we were able to save money by not paying for an event production team, caterer or rental space, we opted to make registration free for both members and nonmembers, which increased branding, publicity and visibility among a broader audience. Total attendees averaged nearly 200, which is the same attendance we get in an in-person environment.

Despite transitioning to a virtual event the event still generated income, making more than $4.5K in revenue.

Taking the time to carefully research, plan and execute on each of these items will help to ensure a successful virtual event.