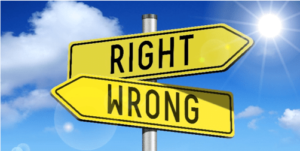 I’ve been a student of leadership communication behavior for more than 40 years. In a career split about evenly between the military and corporate worlds, I have observed and diagnosed problems that have derailed many a career and, in some cases, brought down entire organizations. For Ethics Month, I offer one of the more destructive diagnoses I’ve seen: ethical elitism. This is not rhetorical, theoretical discourse a la Aristotle or Socrates. This is about leaders who, because of their elite status in an organization, believe they are above the rules that govern the “little people” around them.

Ethical elitists use their status to rationalize and justify behavior that would get lesser mortals fired or even arrested. There are daily examples in the news and an epidemic in politics. Nevertheless, everyone, no matter how powerful, rich and famous, is subject to a moral universe. Things are guaranteed to go badly when leaders give themselves permission to behave as if the rules of right and wrong don’t apply to them.

We’ve all seen the You Are Here Arrow on maps. Whether on a map in a shopping mall or displayed on a GPS device, that arrow shows you where you are. Lose sight of that arrow and you won’t know where you are or where you’re headed. Ethical elitism infects leaders when they forget that arrow on the map of life. Unethical behavior will eventually come back to bite them, but until that karmic moment, employees see senior people getting away with unethical behavior and can catch the disease themselves. Leaders demonstrate what is tolerated by their behavior, not words. Codes of Conduct and inspirational posters don’t matter if a leader’s behavior is contrary to doing what’s right.

It is easy to criticize public figures and high-profile leaders for bad behavior, but none of us is immune. Maryam Kouchaki and Isaac Smith writing in the January/February 2020 Harvard Business Review say that “moral humility” recognizes that we all have the capacity to act unethically if we are not vigilant. This vigilance pushes people to “admit that temptations, rationalizations, and situations can lead even the best of us to misbehave.”

The good news is that ethical elitism is both avoidable and curable, both for leaders and the led.  If we all remain centered and grounded, remembering where we are in the universe (not the center, by the way, I checked), we can avoid contracting this disease.

Here are four simple, practical steps you can take to inoculate yourself.

Mike Doble, APR, principal at Doble Consulting, began his career as an Army personnel and public affairs officer, retiring as a Lieutenant Colonel in 1996. He then spent six years at Fleishman-Hillard and 17 at Raytheon in a variety of communications and leadership development roles. He has been an adjunct professor and guest lecturer at George Mason University and is co-author of a chapter in a strategic communication handbook set to be published by Wiley in 2021. He is the author of “On the Hot Seat” a satirical novel about a Washington, DC, PR firm. Mike holds an MBA from Golden Gate University and a Bachelors of Business Administration from the University of Maine.