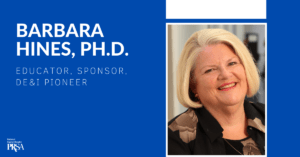 D.C.-area communications professional Barbara Hines, Ph.D., has spent much of her professional life teaching. Communicators from a variety of backgrounds and disciplines—including many of our members—have benefitted from her guidance and mentoring.

Her Beginnings
Growing up, Hines’ father was in the military and her family moved around quite a bit. As a high school student in Texas and Maryland, she began studying journalism and was involved with her schools’ student newspapers. Her love of writing and the news carried over into her time at the University of Texas at Austin, where she studied journalism and speech education.

In an interview with Rochelle Ford for the Association for Education in Journalism and Mass Communication’s (AEJMC) Trailblazers of Diversity Series in 2014, Hines recalled that she first became aware of the need for diversity in media when she was in college and working at the Daily Texan.  She noticed that many of the people at the paper looked like her and that there weren’t different voices being represented.

“I would hear people talking about different options and different views, and I wondered why more people weren’t interested because I thought everybody had the opportunities to participate in the things they were interested in,” she remembered. “Because I’d had a very diverse childhood, and I grew up thinking that everybody had similar opportunities. And that wasn’t really true.”

After graduating from the University of Texas at Austin, Hines took a job as press secretary for Sen. Ralph Yarborough and quickly became his “one-woman army.”

“If he needed something done, it would be done,” she recalled. “And it would be more than what he was asking for.”

It was the late 60’s and Hines was entering the male-dominated arena that was Capitol Hill. Organizations were not concerned with diversifying their workforce, even less so with making sure everyone who wasn’t a white, cis-gendered, heterosexual male was treated equitably and included in organizational culture.

Following Sen. Yarborough’s failed re-election bid in 1970, Hines moved from Capitol Hill to teaching high school journalism and speech at Parkdale High School in Prince George’s County. Schools in that area were just beginning to desegregate and Hines encouraged her students, many of whom were from underserved communities who didn’t have access to the same opportunities their white peers may have, to participate in the school’s newspaper and yearbook, and to get involved with the state Scholastic Press Association.

In 1976, Hines moved on to teach at the University of Maryland at College Park. Within a year, she was promoted to assistant dean of the College of Journalism. Hines faced discrimination in the male-dominated world of academia as well. She often found herself being talked over in meetings. Her male colleagues, who possessed Ph.D.’s, challenged her despite the real-world experience and master’s degree in public relations.  However, she persisted. She decided to pursue a Ph.D. and earned a doctorate in English Education and Communication from the University of Maryland in 1981.

Mentoring, Sponsorship and DE&I
As assistant dean of the College of Journalism, Hines built on her earlier work to help her students succeed as journalists and developed an internship program for University of Maryland students with local news organizations. Colleges had taken note of the lack of diversity in the news business and were working together to try to ensure better representation in the media.

In 1984, Hines returned to teaching full-time as a professor at Howard University, where she has spent the bulk of her 43-year career. In her time at Howard, Hines has directed the university’s journalism program and its graduate studies program in mass communication and media studies. In 2013, she helped establish the university’s Department of Communication, Culture and Media Studies. She is now professor emerita and founding chair of the program.

Hines is a distinguished leader in the PR industry. Her impact on the field, particularly as an educator, is far-reaching and is where her influence may be most profound. She was an early pioneer of mentoring and sponsoring students and professionals of color in a historically white industry, and continues to mentor and support the next generation of practitioners today.

“As our profession has evolved, the importance of having people who care about you, who want to help lead you, and who are concerned about your career is important,” she explained.

Hines has been a PRSA member and PRSA NCC member for many years and has served in leadership positions for a wide array of professional organizations, including College Media Advisers, the Society of Professional Journalists, and the Society for News Design, for more than 40 years. She has been honored by Howard University’s Faculty Senate as an Outstanding Faculty Mentor and in 1999 PRSA named her Public Relations Educator of the Year. The same year, she was inducted into the National Capital Public Relations Hall of Fame.

“I’m grateful that at this point in time people’s vision and compassion are expanding,” Hines said about organizations examining and expanding Diversity, Equity and Inclusion efforts. “I hope that we’re learning from what’s happened in the past. In order to change our organizations, leaders need to be comfortable hiring people who are different than themselves. We learn more from people who have different beliefs and who’ve lived a different story than we have.”

Rochelle Ford, Ph.D., APR, dean and professor at the School of Communications at Elon University is one of Barbara’s many mentees. “Dr. Hines has been the most influential mentor, coach and sponsor in my professional life.  She took me under her wing as a freshman at Howard University, and exposed me to some of the most prominent leaders in the industry. She helped me find role models who looked like me,” she reflected.

Mentors offer encouragement and healthy doses of reality. Rochelle recalled, “She challenged me, at times even scolded me, edited all of my theses and dissertations, and more. She has been there for every major personal milestone from weddings, graduations and baby showers. I call her my Howard mom because I can’t imagine my PR career without her.”

Dr. Hines was seminal to Tiph Turpin’s, Ph.D., Senior Director of Board & MLT Strategic Initiatives at Mars, Inc., doctoral journey at Howard University. Barbara guided Tiph through her dissertation process as her advisor and helped her navigate the challenges of working full-time while she was in the program. “I wouldn’t have earned a doctorate, been able to pursue my dissertation topic, or have the successful career I’ve had so far without her. She inspires me to lead, take chances, speak up with authority on issues of diversity, and actively pursue daily opportunities to mentor, promote, encourage, celebrate and lift up collaborators through my work,” she declared.

As the accomplishments and achievements of women in our profession are celebrated this month, Barbara shares helpful career advice for us all, “Don’t be afraid to take chances. Get out of your comfort level. Expand your viewpoint and horizons.”