Danny Selnick Honored for His Commitment to the PR Profession

The Public Relations Society of America’s National Capital Chapter (PRSA-NCC) is pleased to announce the induction of Danny Selnick into the National Capital Public Relations Hall of Fame. Selnick will be honored at the PRSA-NCC’s 51st Annual Thoth Awards Luncheon and the 20th anniversary of the Hall of Fame occurring on Friday, September 27, 2019 from 11 a.m. – 2:00 p.m. at the National Press Club in Washington, D.C. The Thoth Awards celebrate the best in communications, marketing and PR in the Washington, D.C. region. The lunch and awards ceremony will occur from 11:30 a.m. – 1:30 p.m. followed by a networking reception from 1:30 p.m. – 2 p.m. Tickets, both for individuals and tables, are currently available.

PRSA-NCC started the National Capital Public Relations Hall of Fame in 1999 by inducting 50 leaders with significant accomplishments in the public relations field as part of the chapter’s 50th Anniversary celebration. The Hall of Fame members hold more than a thousand awards, distinctions, honorary degrees, advisory positions, charity board seats, and Who’s Who citations among them. 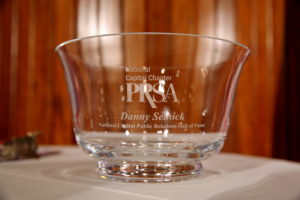 “The PRSA-NCC board of directors joins me in congratulating Danny Selnick for his lifelong achievements in the PR industry, his deep commitment to the public relations profession and practice, his mentoring of generations of young professionals, and his selfless contributions to multiple professional communication organizations and D.C.-area colleges and universities,” said Lauren Lawson-Zilai, 2019 National Capital Public Relations Hall of Fame Chair and PRSA-NCC vice president. “Selnick is a role model due to his enduring impact on his clients and their campaigns and his thoughtful, strategic and generous approach to being a connector to help professionals at all levels amplify their communication efforts and enhance their careers.”

Danny Selnick is a nationally recognized senior communications counselor, who built a successful career at two international commercial news wire services, and is best known for his gift as an industry connector for his willingness to help colleagues and new practitioners, far beyond a business transaction. Throughout his career, he has been dedicated to strategic marketing and communications efforts on behalf of his clients, including associations and nonprofits, advocacy groups, foundations, corporations, and government and political agencies, who focused on public policy and social change issues. He spearheaded marketing and oversaw successful programs, campaigns and projects that reached key audiences and targeted specific media, decision-makers, influencers and the public based on his in-depth knowledge of news gathering and reporting.

“There is no more omnipresent and galvanizing human force for good than Danny Selnick,” said John Seng, principal at Grayscale LLC Consulting and 2017 National Capital Public Relations Hall of Fame inductee. “He’s always struck the right balance between doing what’s right for practitioners at every level, delivering his best for his business clients and serving the greater audiences with whom we all have sought to connect and serve through effective yet responsible communications.”

Over decades, Selnick has provided pro bono support to numerous organizations. He has been a member of the National Press Club (NPC) for nearly 25 years, where he leads The Communicator Team – one of the NPC’s most active committees – to host a variety of professional development events to foster greater ties with working journalists and hosts the annual Communicator Summit. Selnick is also a member of the Headliners Team, which puts on news-breaking events with high profile individuals and dignitaries, and was recently elected as a communicator member of NPC’s Board of Governors representing non-journalist members. In addition, Selnick was invited to join a group of professional communicators and journalists as part of The Insight Committee to the Department of Communication at George Mason University, which was formed to build and enhance relationships between the department, the students and the larger community of practicing public relations and communication professionals as a means to further the needs of the professional communication community. He has been a mentor at the University of Maryland (UMD)’s Grunig Gala, an annual lecturing event and networking series presented by the University’s Department of Communication.

Selnick was also a founding member and vice president of the D.C. chapter of the Hispanic PR Association in order to meet a need for commitment to diversity in programming.

Selnick is also a magician and serves on the board of directors for The International Brotherhood of Magicians, (IBM), Ring 50, one of the world’s largest magician clubs. In that capacity, his greatest contribution was to organize the club’s annual Children’s Holiday Magic Show. As part of that, attendees are asked to bring a new toy or non-perishable food item to support the Alexandria Citadel of the Salvation Army. Additionally, Selnick has been a chapter member of PRSA-NCC for more than a decade and served on the board of directors, as co-chair of the annual Thoth Awards Luncheon and as chair and co-chair of the professional development committee.

Selnick is a sought out speaker on topics such as using new communication technologies and strategic communications for organizations including, professional industry associations, communications organizations and minority groups. He frequently is invited to speak to PR students at area universities including, American University, George Mason University and University of Maryland College Park. He also mentors students and graduates involved in PRSA, speaking at various PRSA and PRSSA chapters, and coaches rising PR students to help them prepare for their first jobs.

“Beyond his business acumen, Danny Selnick represents something far more important and rare in our industry — he puts others before himself,” said Maria J. Rodriguez, president and CEO of Vanguard Communications and 2016 National Capital Public Relations Hall of Fame inductee. “A huge advocate of the profession, he has worked tirelessly to help young professionals and students find their passion in PR, supporting them in every way he can so that the profession can grow and thrive.”

Selnick was honored previously by PRSA-NCC with its Platinum award, which is given to the most valuable chapter member for their dedication year after year as well as the Senior Professionals Award, which is given to the most outstanding senior-level practitioner with more than 25+ years’ experience in public relations. Selnick is also the recipient of several Vivian Awards from the National Press Club, which honors members who exemplify the spirit of former president Vivian Vahlberg, and recognizes them for outstanding service and magnificent leadership. Additionally, Selnick is the recipient of Ring 50’s Sam Sabar Award – an award only given 11 times since the Magic Club’s founding more than 50 years ago. Selnick was awarded this acknowledgement for his commitment of his time and talents to support the Club in advancing the magical arts.

Selnick earned a B.A. in history, political science and economics from Hunter College in New York and a M.A. in international affairs and business from Columbia University.

Criteria for induction in the PRSA-NCC Public Relations Hall of Fame includes 30 or more years of distinguished accomplishments, visionary leadership, mentoring, commitment to the profession, positive and significant impacts on the industry, and contributions to the local public relations community. Inductees must have worked in the Washington, D.C. area for at least 10 years. To view the list of Hall of Fame members, visit:
https://www.prsa-ncc.org/about-us/leadership/hall-fame-members