Editor’s note: This is part 2 of a series. Read part 1 here.

Heather Himes, the daughter of an Ohio farmer, died of an opioid overdose in March 2016. After hearing about this story, the American Farm Bureau joined forces with National Farmers Union to address this serious public health crisis. In October 2017 AFBF commissioned a nationwide Morning Consult research poll of 2,201 rural adults to learn more about the scope of the problem and attitudes toward opioid addiction. We developed our campaign theme – Farm Town Strong – based on message testing from our primary research and officially kicked off the, “Farm Town Strong,” campaign with National Farmers Union in January 2018. 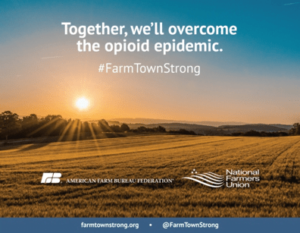 After the first 90 days, we met or exceeded all of our stated media, social and web metrics. But how could we really know if our campaign actually made a difference? We needed to dig deeper to learn more. In January 2019, after the first full year of the campaign, we commissioned a second Morning Consult research poll of 2,479 rural adults. Results showed a 17% increase in awareness of the opioid epidemic’s impact on rural communities, a 16% decrease in the perception of shame surrounding opioid addiction and an 11% decrease in those who said family members stigmatize opioid addiction, demonstrating a significant, measurable impact on awareness and perceptions of the crisis.

Tips for Developing Winning Entries
As strategic communicators, we’re all aware that the RPIE model of strategic communication planning is universal. So if you’re pursuing APR accreditation, for example, think about the plan you share in your panel presentation. Could you also submit it to the Silver Anvil Awards, a chapter awards program such as the PRSA-NCC Thoth Awards, or another awards program? We submitted our campaign to the Silver Anvils in three different categories and earned Awards of Excellence in all three. We then submitted revised plans to the Thoth Awards and the Institute for Public Relations Research Awards. Our entries won both, as well as Best in Show this year. 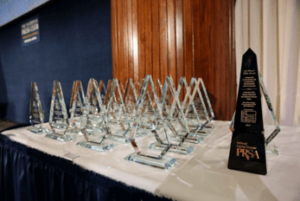 Reach out to someone in your network who has won the award you seek to earn. When we were drafting the Silver Anvil entries, I contacted a former supervisor who had won a Silver Anvil for his work. He was extremely influential in helping us develop the Silver Anvil submissions, which also formed the basis for our submissions to the Thoth Awards and the IPR Research Award.

Lessons Learned
While it was extremely rewarding to have our strategic communications work recognized by our peers, what really mattered was being able to demonstrate our campaign’s influence on public perception and reducing stigma about the opioid epidemic. But what really drove this home were the discussions we had after the Thoth Awards presentation – and one stands out. A communications leader from a public research university focused on public health and medicine pulled us aside and personally thanked us for making a difference. I don’t think there’s any better measure of impact than that.

Ray Atkinson, ABC, APR, is director of strategic communications for the American Farm Bureau Federation. An accredited public relations professional with more than 20 years of experience, he has developed and executed strategic communication plans to achieve measurable business, public policy and organizational objectives for public companies and nonprofit organizations. He and his AFBF and NFU colleagues are recipients of three Silver Anvil Awards of Excellence from PRSA, the Research Award from the Institute for Public Relations and Best in Show in the PRSA-NCC Thoth Awards in 2019.

Farm Town Strong: Overcoming the Rural Opioid Epidemic: Part 1 of 2
Roger Winemiller is an Ohio farmer with an unspeakably tragic...