Roger Winemiller is an Ohio farmer with an unspeakably tragic story. In March 2016, his 31-year-old daughter, Heather Himes, died of an opioid overdose at their home on the family farm. Within nine months, opioids claimed the life of his son, Eugene, who was 37. Today his only surviving son, Roger T. Winemiller, is in treatment to free himself from a 20-year spiral of opioid addiction. 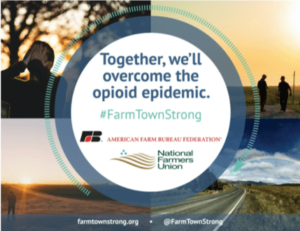 When my colleagues and I at the American Farm Bureau first heard this story, we were devastated. We soon learned that this was unfortunately all too common, with opioids claiming more lives than gun-related violence or motor vehicle accidents, and rural areas experiencing higher drug overdose death rates than urban areas. We knew we needed to do something to address this serious public health crisis.

Laying the Groundwork
We began having conversations with National Farmers Union in late 2018 and started meeting to develop a strategic communication plan. But first we needed to know more about the impacts of opioid addiction in our target audiences of rural adults and farmers.

Understanding the Issue
In October 2017, AFBF commissioned a nationwide Morning Consult research poll of 2,201 rural adults to learn more about the scope of the problem and attitudes toward opioid addiction. It was the first national research focusing on the impact of the crisis in rural America, and specifically, on farmers. 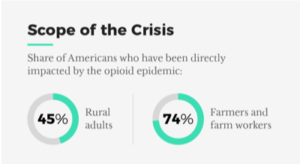 Planning and Strategy
We developed our campaign theme – Farm Town Strong – based on message testing from our primary research. Our messaging strategy was to frame the story about addiction as an epidemic that must be addressed, rather than what many rural families perceive as something to be ashamed of – a message our research showed would resonate in rural America. We established media, social media and website objectives to gauge impact during the first 90 days of the campaign.

Launching the Campaign
On January 3, 2018, we officially kicked off the “Farm Town Strong” campaign with a joint news release, a website featuring prevention and treatment resources, and a Twitter account, with the hashtag #FarmTownStrong to unify our social media campaign. Our original research earned us national media coverage in top-tier outlets, generating awareness and interest in our cause.

Editor’s note: Part 2 of this series will be published next week.

Ray Atkinson, ABC, APR, is director of strategic communications for the American Farm Bureau Federation. An accredited public relations professional with more than 20 years of experience, he has developed and executed strategic communication plans to achieve measurable business, public policy and organizational objectives for public companies and nonprofit organizations. He and his AFBF and NFU colleagues are recipients of three Silver Anvil Awards of Excellence from PRSA, the Research Award from the Institute for Public Relations and Best in Show in the PRSA-NCC Thoth Awards in 2019.

Farm Town Strong: Overcoming the Rural Opioid Epidemic: Part 2 of 2
Editor’s note: This is part 2 of a series. Read...