Post by Toby Cox, Clutch
Businesses and the public relations industry have a tenuous relationship with authenticity, especially when it comes to corporate social responsibility and speaking up about social movements.
The question of authenticity sometimes arises when a company announces its support for a social issue or cause.
Although most people (71%) think that companies should take a stance on social movements, they unsure whether businesses are genuine and whether it even matters as long as it raises awareness for an important issue or cause.
Most people think businesses support social movements for self-serving reasons, like to earn more money (29%), attract specific customers (20%), and earn media coverage (19%). 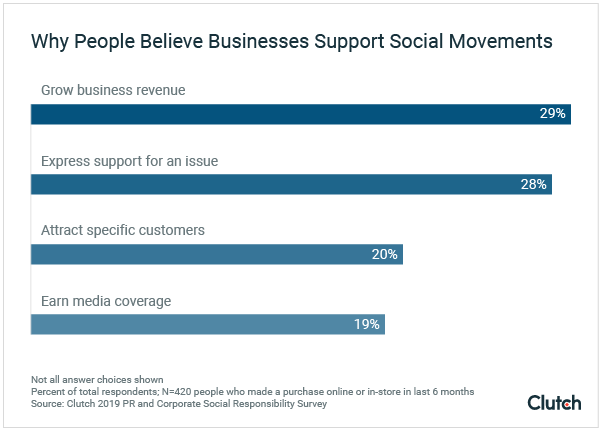 Twenty-eight percent of people (28%) think businesses support social movements because they care about the issues the movement addresses.
Of course, these reasons aren’t necessarily mutually exclusive. It is possible for a business to both care about an issue and recognize that speaking up about it will earn them more money, customers, and media coverage.
PR experts actually recommend businesses approach speaking up on social movements in ways that make sense for their brand.
“There’s nothing wrong with social responsibility being a strategic decision, but it should also be one that you strongly believe in and are willing to stand up for,” said Josh Weiss, CEO of 10 to 1 Public Relations.
Businesses that balance strategy and authenticity when they choose to speak up on social movements and issues do what’s best for their brand, employees, customers, and the movement itself.

Identify Which Issues Align with Your Brand Purpose

Businesses that have a strong understanding of their brand purpose will have an easier time identifying which issues are relevant to their brand and which they can stay silent on.
“Your corporate purpose is your North Star in determining whether to respond to certain movements,” said Steve Cody, CEO of Peppercomm digital communications firm.
Patagonia, for example, have always aligned its brand purpose around the environment and environmental issues.

Source
In 2018, Patagonia announced that it will donate the money saved from the tax break to environmental organizations. Its customers supported this bold, political statement because they have come to expect Patagonia to stance unwavering on issues regarding the environment.
“I’m not in the business to make clothes,” said Yvon Chouinard, founder of Patagonia, in an interview. “I’m not in the business to make more money for myself… Patagonia exists to put into action the recommendations I read about in books to avoid environmental collapse. That’s the reason I’m in business — to try to clean up our own act, and try to influence other companies to do the right thing, and try to influence our customers to do the right thing.”
Patagonia identifies issues surrounding the environment and conservation as a central component of its brand purpose and has never wavered from that stance.

Businesses typically have a lot of stakeholders to consider, such as funders, employees, and customers.
Every business’s first goal is to make enough money and grow. Taking a stance on a social movement can either help businesses elevate their brand and increase revenue or negatively impact their brand.
This is why it is important for businesses to consider not only their brand purpose, but how their stakeholders will react to them speaking out on a social movement.
Nike, for example, considered its brand purpose before launching its 2018 “Dream Crazy” ad that featured former NFL Quarterback Colin Kaepernick as its narrator. 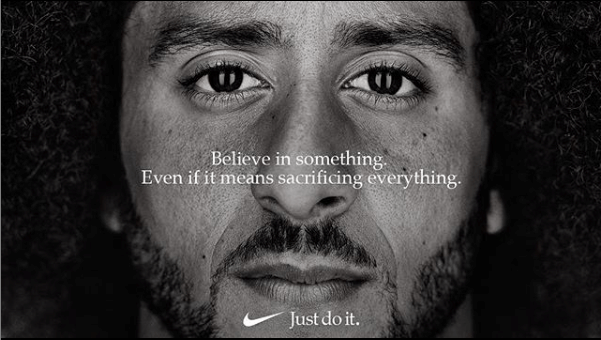 Source
The ad featured 16 athletes that have overcome challenges and that challenge people’s stereotypes of what an elite athlete looks like.
When the ad was first launched, it received harsh criticisms and people showed their dissent by burning Nike shoes. 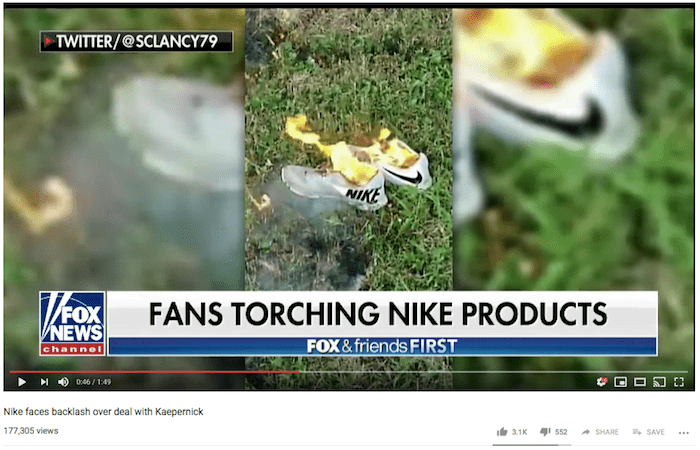 Source
However, shortly after the ad’s release, Nike’s sales went up, reflecting that most of their customers supported the message of the ad.
Nike’s decision to feature Kaepernick as the ad’s narrator was a strategic one.
“They made their decision with intent,” said Jen Fry, a social justice educator. “It was very data-driven, knowing who their clientele is and what they’ll accept.”

Authenticity and strategy complement each other when it comes to businesses deciding whether to take a stance on a social issue.
By identifying the issues that are a natural fit for their brand and by considering their stakeholders, businesses can do what’s best for both their brand and the movement they address.
About the Author
Toby Cox is a content writer and marketer at Clutch, a B2B research and reviews firm, where she covers public relations firms and industry news.