Integrated Media Relations: Leveraging Data to Break Through in a Busy News Cycle 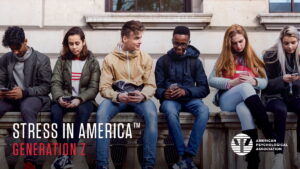 Public relations practitioners are not immune to stress, but do we truly understand the sources and consequences of extreme stress? More important, how can we address the causes and impacts of stress to support the public’s overall health?

The American Psychological Association (APA) knows that these are critical issues that can affect the overall health of Americans, as we understand that long-term exposure to stress can have serious physical consequences. Our challenge is to figure out how we as psychologists can draw attention to this important conversation about stress in an increasingly crowded news environment and provide solutions through our expertise.

In 2006, APA and Vanguard Communications conceptualized an annual survey — Stress in America™ — to generate media interest in covering this important public health issue. Stress in AmericaTM is now an annual project, and each year APA partners with The Harris Poll to collect data from the American public to both tell a vital story about the nation’s health and stress and consider how issues in the news cycle affect Americans’ stress.

For its work on Stress in America™: Generation Z, APA and Vanguard were awarded a 2019 Thoth Award in the category of Integrated Media Relations: Campaigns with a Budget Over $25,000 by the Public Relations Society of America’s National Capital Chapter.

The 2018 survey examined news topics that Americans were encountering every day that could affect their stress levels. Released prior to the midterm elections, in a news cycle focused almost exclusively on political stories, the survey was intended to supplement — instead of compete with — what reporters were already covering, allowing us to address a serious health issue as part of the larger news landscape.

Through responses to questions about issues such as gun control and climate change, the team saw that the nation’s youngest adults — Generation Z — were emerging as a social and political force. Stress in AmericaTM: Generation Z in 2018 provided the first opportunity to examine the stressors and stress levels of this important and newly prominent voice in the U.S.

What did the 2018 survey find? Generation Z adults reported experiencing more stress than any other generation.

APA and Vanguard developed a concise report to highlight the survey’s top metrics and offer graphics that could be used across multiple platforms. Embargoed pitches were sent to top media outlets, leveraging relationships and allowing for deeper storytelling prior to the report’s official release. The strategy included conducting outreach to media outlets that reach a Generation Z audience, including Vox and Teen Vogue.

The survey coverage positioned APA members as experts in more than 500 print and online hits – including outlets like The Washington Post, CNN and People – that generated more than 43 million estimated daily media impressions. A radio media tour to complement the other media outreach effort resulted in radio coverage in 16 additional markets and a listener audience of up to 23 million.

The engagement on Twitter also reached new heights for the survey. In the first week after the survey’s release, tweets about the report reached 54.8 million accounts. Notable news organizations including CNN and TIME — as well as influencers such as Arianna Huffington, Katie Couric and former Congressman Patrick Kennedy — amplified coverage by tweeting the results.